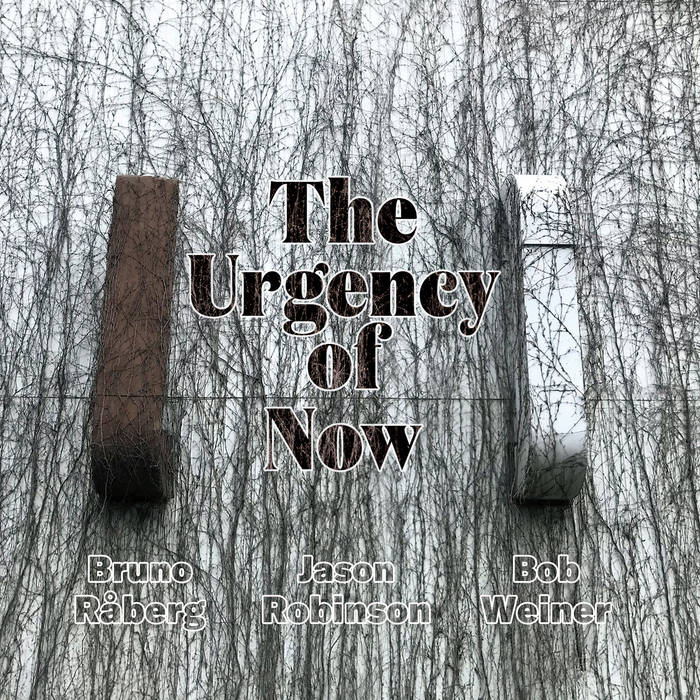 For music that privileges improvisation, relationships matter. Composer and trumpeter Wadada Leo Smith once told me that he chose musical partners based on the person; the instrument they played was irrelevant. When musicians are responsive to each other, listening deeply in real time, they are, by definition, in relationship.

The music on The Urgency of Now, made by Jason Robinson, Bruno Råberg and Bob Weiner, is largely improvised, and maintains a remarkable level of coherence. That only happens when a band of friends are invested in making a joint statement.

“I think of us less through the lens of what instruments we play and more as creative sound makers and critical thinkers with souls and personalities that transcend our instruments,” echoes saxophonist and flutist Jason Robinson. “Bob is Bob, Bruno is Bruno; they happen to play the instruments they play.”

For Robinson and percussionist Bob Weiner, music is a means to connect people, an opportunity to build an open-minded confederation of musicians and music lovers in service to the music and to each other.

Over the past few years, they have invited many of western Massachusetts’ most creative musicians to improvise together in a private setting. “We look at this project as community building,” Robinson says, “hopefully encouraging musicians from different scenes in our area to work together and develop new projects.” They also helped form Soundworks Gathering, a two-year, scene-building experiment designed to bring together regional artists traveling in different orbits in a monthly concert series at Flywheel Arts in Easthampton, Massachusetts. And they collaborated on a Mass Humanities-supported project at the Amherst Survival Center, bringing music and roundtable discussions to the Center and its clients.

Bassist Bruno Råberg, who lives 90 miles east of his bandmates, doesn’t get to interact with his friends as regularly. They see each other mostly at rehearsals, gigs and recordings. But the experience is no less profound. “VERY easy and natural,” Robinson says about playing with Råberg. “Bruno improvises like a composer and has a strong empathic sense. He makes anything I play feel planned or pre-composed, even if it’s a product of the moment.”

Råberg met Robinson soon after the saxophonist moved from California in 2008 to teach at Amherst College. They were part of two Boston-based ensembles: Allan Chase’s seven-piece composer’s collective, and The Outnumbered, a collective quintet with saxophonist Charlie Kohlhase, pianist Josh Rosen and drummer Curt Newton. Råberg and Weiner met in Boston in the late-1980s, when they were part of a flourishing, New England Conservatory-centered improvised music scene, playing with folks like Mick Goodrick, Ole Mathisen, Tim Ray and others, at venues like Ryles, The Willow and the 1369 Jazz Club.

Born in rural Sweden, Råberg has lived in the Boston area since in 1981 when he received a scholarship to attend NEC. His 12 recordings as a leader include influencers like Chris Cheek, Donny McCaslin, Matt Wilson, Ben Monder, Adam Cruz and Bruce Barth. He is faculty at the prestigious Berklee Global Jazz Institute, the latest iteration of his 30-year relationship with Berklee College of Music. He has been an integral part of the Boston jazz ecology for decades.

“I am kind of amazed at how the music has logic, organization, language, direction and shape, without us directing it,” Weiner says.

In 1957, Sonny Rollins catapulted the saxophone trio (with bass and drums) into jazz consciousness with two recordings, Way Out West, and a few months later, A Night at the Village Vanguard. Since then, Lee Konitz, Ornette Coleman, Albert Ayler, Joe Henderson, David Murray, Joe Lovano, Kenny Garrett, Marty Ehrlich and others have made important statements using this configuration.

But the trio Robinson, Råberg and Weiner most resemble is the endlessly creative ensemble from the 1970s: AIR - Henry Threadgill, reeds, Fred Hopkins, bass and Steve McCall, drums. Neither group is a “saxophone trio,” per se; both operate cooperatively, as co-equal branches. Like AIR, these guys cover an enormous amount of aesthetic ground, and everyone has agency to dictate musical direction.

“I had the feeling of freedom and excitement from the first to the last note,” says Råberg. “As a bass player I could fill any role in the music, not only being the bass but also playing melody and creating sound textures.”

“Bob’s vast knowledge of so many percussion instruments, drums styles and traditions come through in his rich vocabulary, sensitivity and array of sounds,” marvels Råberg.

Jason Robinson holds a PhD from the University of California San Diego, where he was mentored by George Lewis and Anthony Davis. His dissertation looks at improvised and experimental musical practices in California within the context of social and cultural formations. Robinson was a long-standing member of the reggae group, Groundation, and founded Circumvention Music, which released his 1998 debut recording, From the Sun. His primary vehicle for composing is his Janus Ensemble, which includes Drew Gress, Ches Smith, George Schuller, JD Parran, Marty Ehrlich, Marcus Rojas and Liberty Ellman. With colleagues Michael Dessen and Mark Dresser, Robinson is a leader in telematic music: live performance via the Internet by musicians in different geographic locations. He is an Associate Professor of Music at Amherst College, where he currently chairs the Music Department.

In his smart little book, A Listener’s Guide to Free Improvisation (University of Chicago Press, 2016), John Corbett gives us a core concept: “interaction dynamics,” the malleable, shifting, give-and-take between improvisors. “This is the single most exciting thing in the music,” Corbett writes, “and what sets it furthest apart from other kinds of music making…All the idealism that is sometimes mapped on to free music – the notion that it’s like a miniature model of egalitarian society; that it represents a communal way of working together – is extrapolated from the way players interact.” (p. 49)

From beginning to end, The Urgency of Now provides a deep dive into the multifarious world of interaction dynamics. These three bold and accomplished instrumentalists, making music in the moment, in relationship with each other, have made a collective statement that bears repeated listening.

Glenn Siegel is the founding director of the 31-year old Magic Triangle Jazz Series at the University of Massachusetts, Amherst, and of Pioneer Valley Jazz Shares, a non-profit, shareholder-based concert organization now in its eighth season. For 11 years, he curated and produced a solo piano series for the Northampton Center for the Arts, A World of Piano. He served as Manager of WMUA-91.1FM at UMass for 28 years, where he produced Jazz in Silhouette. His concert reviews can be found at: blogs.umass.edu/gsiegel/.

Our sincerest thanks to Eric Hofbauer

If you like Bruno Råberg, Jason Robinson, Bob Weiner - The Urgency of Now, you may also like:

The Hammer and The Relentless from the Boston band Malleus stop by for a chat.